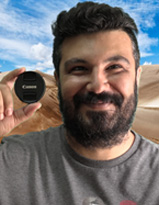 Charalambos was born in Paphos, Cyprus, on May 1980.

He graduated from the Drama and Film Department of the University of Exeter (2005 to 2006) and received his MA in Film Studies with Distinction. His postgraduate dissertation project was the short docudrama τριΚυμία (2006), researching the boundaries of fiction and documentary as main modes of depicting the real in cinema.

He was actively engaged in promoting Culture and Arts in Cyprus as the president of the Cyprus Photographic Society and vice-president of Home for Literature and Arts in Paphos (2006 to 2007) by organizing-curating numerous events, exhibitions and cinema screenings.

In 2011 Charalambos was awarded a PhD in Film Studies by Practice as Research from the University of Kent for his dissertation: The truth-machine: continuity and the ontology of the moving image of cinema. Feature documentary Η Ανθολογία του Πάσχα (2010), a study on cinematic non-fictional representation produced as part of the PhD research, received the Ι. Φ. Κωστόπουλος foundation grant.

He is currently a Lecturer and Programme Coordinator of the MA in Digital Video Production at Neapolis University Pafos.