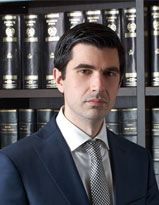 He is a member of the Patras Bar Association (2003) and an academic assistant at the Law School of the University of Athens.