The Organization of Young Scientists of Democratic Rally, successfully organized a lecture entitled “Alternative Investments: from theory to practice, the case of Cyprus”

Within the framework of its multifaceted action, the Organization of Young Scientists of Democratic Rally, Paphos successfully organized a lecture on Tuesday, 29/10/2019, at the Neapolis University in Cyprus, entitled “Alternative Investments: from theory to practice, the case of Cyprus”.

This was the second lecture organized by O.Y.S of Democratic Rally Paphos, as part of the organization’s initiative under the general name “Think outside the Box”.

Keynote speakers were Ms. Dimitra Kalogirou, Chairman of the Board of Directors of the Cyprus Securities and Exchange Commission, Mr. Marios Dimitriadis, Director of M.D Mindset Capital Company and former Minister of Transport, Communications and Works, and Dr. Panagiotis Andreou, Assistant Professor, Department of Commerce, Finance and Shipping, Cyprus University of Technology.

The speakers discussed, inter alia, issues related to the work and role of the Cyprus Securities and Exchange Commission, as the primary authority responsible for ensuring the steady growth and stimulation of investment in Cyprus, the opportunities offered today by the Cyprus Capital Market in general and Paphos especially in relation to attracting Alternative Investment Organizations, while extensive analysis was made on the concept of Financial Illiteracy and to what extent this problem is present in Cyprus today.

Short remarks were made by the Provincial Secretary of DISY Organization of Young Scientists in Paphos Mr. George F. Pitros and Vice President of the Board of Directors of the Neapolis University in Cyprus, Mr. George Leptos.

The lecture was coordinated by the Director of Finance and Administration of the Neapolis University in Cyprus, Dr. Andreas Moleskis. 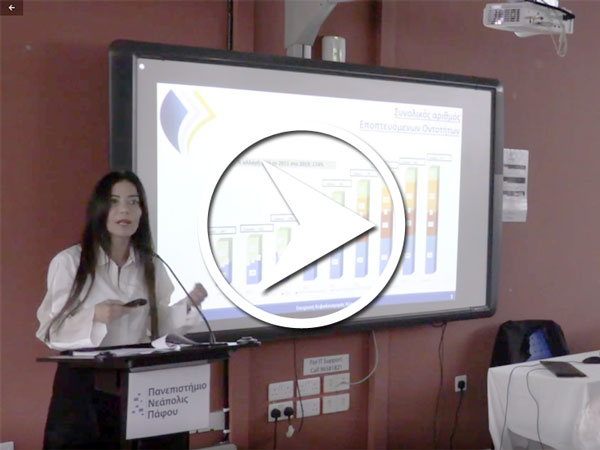 Cooperation Agreement between Neapolis University and Fourlis Group of Companies

On December 31st 2019, a meeting took place at Fourlis Group of Companies headquarters in Athens between Prof. Pantelis Sklias,...

A group of ten significant journalists from China and Hong Kong who cover the Real Estate, economy and social segment,...